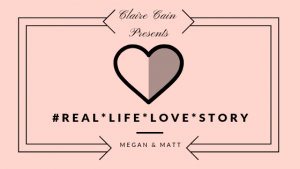 One of my favorite things about meeting new friends is learning about how they met, how they got together, if married, how the engagement happened, etc. With that in mind, I created an interview that my friend Megan and her husband were kind enough to take and be the guinea pigs for this new feature on the blog.

Our first #RealLifeLoveStory is Megan and Matt. 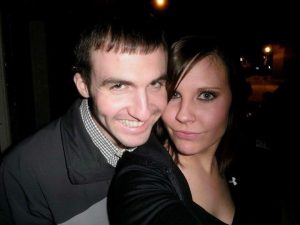 The spirit of this feature is to show real couples and some of the things about the couple—it’s meant to be light-hearted, fun, and uplifting. The more serious questions are there only to serve as a place where you can share the #reallife part of the equation, but for the most part, these little features will give you a chance to meet a couple and enjoy their love story.

You’ll see immediately that Megan and Matt’s story is one that is folded into military life. Though I hope to interview people from all walks of life, I am excited that you’ll get a glimpse into what it was like for this couple to come together in the midst of a military career (not unlike my girl Alex Moore, amiright?).

Ok, now to the good stuff! (And please note, the italics are my emphasis because I get excited.)

Describe meeting your spouse.
We initially met online through a dating website and talked on and off for five years. It was never in a romantic sort of way, more friendly, platonic and always in between our respective relationships. After his second tour, he started conversation again, but I was jaded and told him I didn’t want anything to do with dating him, thinking it would make him back off. I guess he heard, “challenge accepted” because he added me to facebook and asked for my phone number. I still pushed back, but when I lost my job, I let my guard down. I told him I had a bad day and he said, “I’ll be there as soon as I can.” Excuse me? I thought he was joking. He wasn’t. He drove from Fort Knox, Kentucky to Sioux Falls, South Dakota that night to make me feel better. He stayed Saturday and left Sunday morning to be back for Monday morning formation. That man drove 28 hours to spend about the same amount of time with me because I lost a job. I knew then that this was big time.

What was your first impression?
When he actually walked through the door I was shocked at first, but I remember thinking he was way hotter than his pictures showed. He also came across shy and unsure, which was adorable. And SO respectful.

What was his? (Don’t be shy… ask him!)
He was really excited to meet me. But really, really nervous. He was convinced I would see him and blow him off. He thought I was gorgeous.

What was your first date?   Our first date was a few days after his 24th birthday and the weekend before Valentine’s Day. He drove to South Dakota again a couple of weeks after we initially met. We had been talking every day since and this was our first time going out together. We went to dinner first and then out for a few drinks with a couple of my friends. We had a lot of fun and my friends approved. 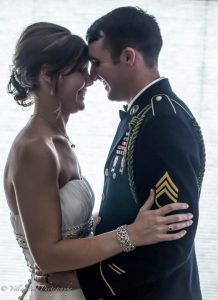 When did you get married—how long after you met, etc.?
We got married a week after he redeployed. We had met 11 months prior and only been engaged about 6 months. We were married January 6, 2012 after meeting January 28, 2011.

What’s the best thing you’ve done together to make memories since getting married?

Had kids. They are the best memories for the both of us. Each birth and every new first are hands down our favorite memories. Also, both his homecomings for the deployments we endured together (he has deployed 4 times, but I was with him for only 2.) Traveling in Europe the 3 years we were stationed in Germany provided some fun memories as well.

What is your favorite thing about him?

His eyes. He’s such a serious guy. Doesn’t change facial expression often and most people think he always looks angry (I mean, he does, but he’s not). His eyes have the most incredible mix of brown, gold, green and gray and they morph with his mood. When he’s happy they’re bright, shiny golden green. When he’s angry they’re dark gray brown. I can always tell what he’s thinking and feeling when I look into his eyes. His smile is rare, but it’s always apparent in his eyes when he’s in high spirits. He’s extremely passionate, but you can’t know that unless you know him. And his passion for me and our boys is always written in the depths of his eyes. They are truly the gateway to his soul.

What is his favorite thing about you?

My passion for things and people. Being a good mom. Being a good wife. Always taking care of people I care about. No matter what I do, I’m passionate about it. He admires that.

What’s something you’ve learned from him?

Flexibility. My type A personality struggles to be flexible and roll with the punches. He’s never known anything different. I still have a hard time and struggle to keep my anxiety in check at times with what the Army throws at us, but he always pulls me off the ledge, reminds me that we’ll get through it all okay and be better for it. He always grounds me and helps me let go of what I cannot control. I haven’t perfected flexibility, but I’m way more flexible and relaxed than I used to be.

What’s something he’s learned from you?

How to cook. And a lot of patience.

I had dated a guy in the Army National Guard and a guy in the Air Force prior to meeting Matt. The first broke things off via text because “he didn’t want to have to think about me as well as his mother and sisters” while he was deployed. The Airman went to Korea for a year and had terrible communication skills. This is why I say I was jaded. I wanted nothing to do with any more military men. In my attempts to dissuade his advances I used fun quips such as, “Wow, you can actually spell and use proper punctuation for an Army man.” And, “I will never date a military man ever again.” My personal favorite, “I don’t date idiots who couldn’t do anything better than join the Army.” I was also convinced I couldn’t deal with distance or the loneliness.

What are your thoughts on those concerns after?
I was pretentious, but we laugh about most of it now. I still hate the distance, loneliness, terrible schedules, training etc. However, I also know that I can handle it and I’m stronger than I ever gave myself credit for. He must be a saint to stay with a woman so arrogant and who has this mouth.

How long was your spouse’s first extended absence?

What is the hardest part of military life?

What is the best part of military life?

The community we create. I have met the BEST people in my life through our moves and duty stations. I would never trade a single one of them for a less challenging path. I’m convinced there is no better community than the military community. We have to be tight knit and stick together, because we’re all we have. We’ve all been through it, we’ve all needed help and so these people are the most ready, willing and giving people I’ve had the privilege of knowing.

What is one thing that military life does FOR your relationship?

It’s made us a team. When we fight, we have to work it out. There is no “going to cool off at my mom’s house.” We have to cool off in our own house and then talk about things like adults. We’re stronger for it. Our communication is top notch (most of the time) because geographically we have no options but to stay put and work through issues. Maybe it’s stubbornness, but I like to believe we know the worth of our marriage and so we both take time to put in the work.

On a scale of 1 to 5, 1 being “self buzz cut without a mirror” and 5 being “this guy goes to a barber for his high and tight,” how bad was his haircut when you first me him? 😉

He’s always gone to a barber, so other than some basic training photos, he’s always had a 5.

Anything else to add?
I wouldn’t and couldn’t do this life, duty station to duty station, unknown stress and anxiety about how uncertain our lives can be with anyone but him. He’s my best friend and partner, and I couldn’t be prouder to have him for my husband.

THANK YOU to Megan and Matt, and thanks for reading. Go forth, and love! 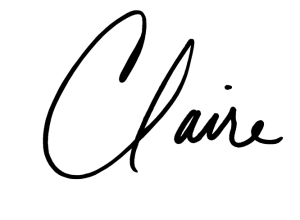 PS: Want to be featured on #RLLS? E-mail me at Clairecainwriter@gmail.com!